What To Do When You Can't Sleep: The Little Shop Of Colors.

This morning I (Steve) woke up at 5AM and knew that there was no going back to sleep (even though it was the weekend and I should have been able to sleep in!). What the heck, I got up, brewed some coffee, ate some cereal and headed out to the one-car-garage-disaster-area that, this AM, was my shop-in-progress.

Here's what was I was facing - everything piled in the middle so that the walls could be insulated, sheeted, primed and painted.  I'd already completed the first 3 tasks over the past week but the finish painting remained so I took a deep breath, fired up the kerosene heaters and got after it. 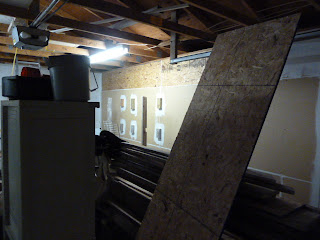 I used a combination of colorful paints that we'd used in our kitchen and dining room. While living in New Mexico we became captivated by the fiesta of colors that is commonplace and we've been inspired ever since.  This project, being a creative space, was very much in need of the energy that colors can bring.

Here's two walls...the place is still a mess but more colorful and, given that, I was excited to get this shop up and running. More paint and quite a few hours of organization later and.... 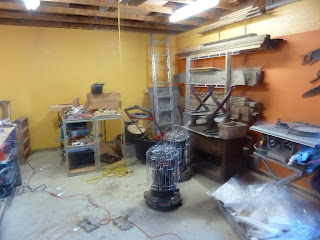 ...here's the very same wall that is shown in the first photo in this post. To the left is my indoor stockpile of reclaimed wood nicely organized on a rack that I'd build from "junk" that was left behind by the previous peeps. To the right are a few old saws that I find interesting and inspiring (3 of them were pulled out of junk piles here and there). The big one is a gift from Jennifer.They all still cut just fine too! 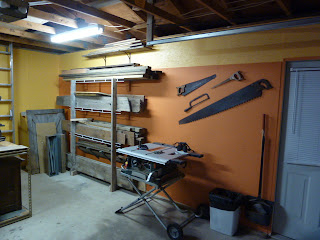 Here's a shot of the opposite wall - same yellow but a nice deep red for contrast. I made the workbench along the wall from wood that I pulled out of the trash when we lived in Grove City (trash day was always a bonus there). The metal cabinets and some of the other racks were purchased (thought I'd better chip in and do my part to boost the consumer economy since black Friday and cyber Monday have seemingly "failed" us). 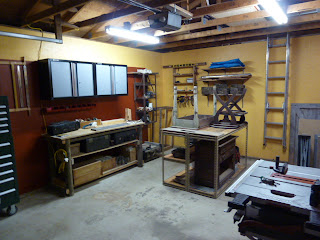 I found this little gem in a junk pile in another scenario and screwed it to the wall for fun and to store small things and maybe a first aid kit (got all ten fingers still but one never knows....). That cracked paint is NOT faux, believe it or not! 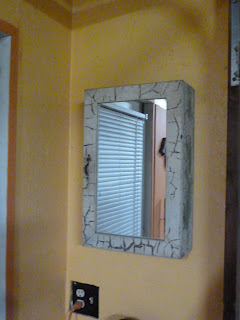 Finally got to put up the Audubon bird call clock that my brother got for us several holidays ago. Yeah, that's 6PM, same day (I was going on a 12+hour day). 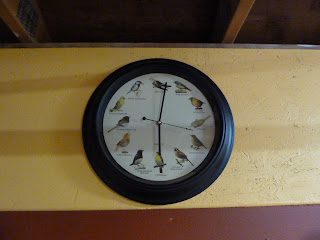 Here it is, pretty much ready to go for woodworking and maybe some metalsmithing. 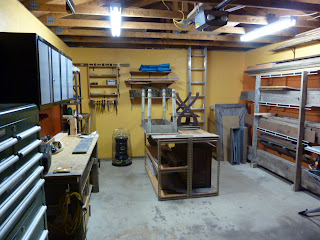 A recording of a particularly heavy set by Umphrey's McGee helped me kick this project's butt, and I must give a headbangers seal of approval for their version of Dr. Feelgood. Additional thanks for inspiration go to Jennifer and The Land of Enchantment! 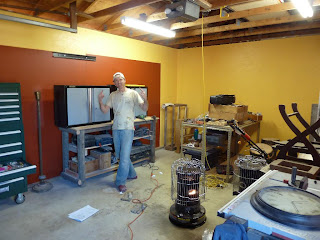