What to do with an old box (for kiddos)!

This summer my co-workers and I (Jennifer) taught about soil and the soil food web as part of our summer program series for kiddos.  I focused on soil herbivores and omnivores and wrote a little puppet show highlighting these cool creatures, but alas - no puppets existed for soil herbivores other than a snail.  Imagine that!  Knowing we had many miscellaneous craft supplies stored away at work and I had a nice big box from our new dual flush toilet, I made a set for the soil creatures and drew/colored 2 dimensional soil herbivores and omnivores.  Check it out... 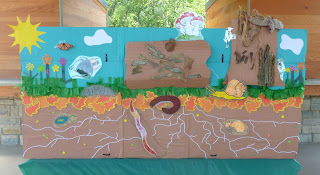 This is such an easy project to make at home and is a great learning tool!  I laminated the soil creatures for resilience during many programs, but it is not necessary for home use.  Unfortunately I forgot to get a picture of the back but that is the control station for the puppets.  I cut a slit in the box behind each creature that needed to move and attached with duct tape a perpendicular piece of cardboard to the creature.  I then pushed that piece of cardboard through the slit (from the front) and voila - a handle to move the animal when operated by a young hand! I made the slits large enough so the creatures moved with ease up and down and back and forward. 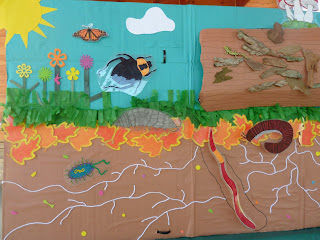 I added some other creatures for fun and so loved seeing kiddos make up their own story with the creatures after mine.  Yay for creative learning! 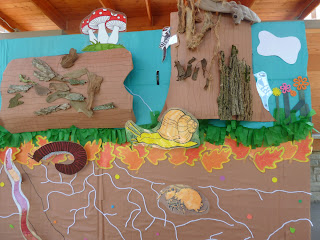 Other creatures included for fun are: bat, downy woodpeckers, salamander and monarch.

I would love to see anyone else's creation should you make something like this!
Posted by Jennifer at 2:35:00 PM