Our place, Coffeetree Bottoms (named for its abundance of Kentucky Coffeetrees), is situated on the edge of the Little Wabash River Valley and just west of the continental divide at Ft. Wayne. Ft. Wayne - when it was a frontier defensive fort - was a major strategic location due to its position along a short (about 9 miles, give or take) portage across the drainage divide that separated the waters of the Wabash River and the Maumee River. West of this divide, waters flow to the Gulf of Mexico via the Wabash/Mississippi basins. East of this divide, waters flow to the North Atlantic via the Maumee River/Lake Erie/St. Lawrence Seaway route. When water, foot and horse travel reigned, this was quite a linkage for native peoples, explorers, traders and, ultimately (and alas) soldiers. One could travel from New Orleans, through (what is now) the midwest, across the Great Lakes and out to the N. Atlantic (and back) entirely on water except at Ft. Wayne where a short portage across the subtle continental drainage divide was possible. 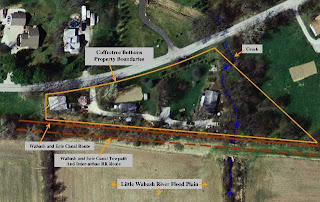 So today we saddled up our iron horses and took the short ride around the corner to Arrowhead Marsh - one of the first preserves (along with Arrowhead Prairie) created by Little River Wetlands Project (www.lrwp.org). 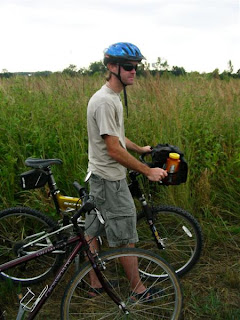 Some 30,000 acres of bottomland forest and wetland was cleared from the Little Wabash River valley by some very industrious anscestors. Why? Because, cleared and drained, bottomland soils are generally the most fertile and such is the case in this valley. But many among us now realize that a mixture of agriculture and natural areas can mutually benefit both.

Native prairie grasses, fully fruited with a forlorn barn for a thought-provoking backdrop: 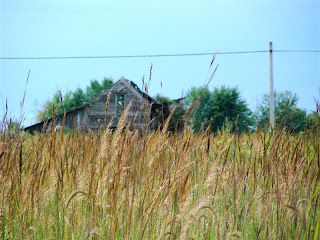 But enough of this yammering about history and river systems! Let's explore.
Jennifer, ready to hike: 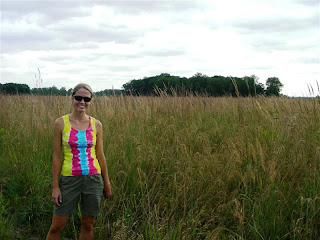 Steve, already on the trail. Dry right now, this place is often entirely under water during parts of winter and fall: 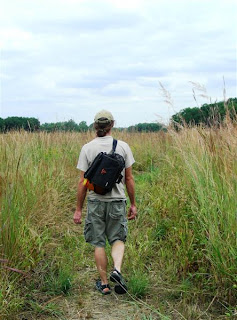 The Arrowhead preserves were, not long ago, cropland capable of 200+ bushel/acre corn and a like-bounty of soybeans. Now this land is a splendor of native grasses and wildflowers.

Big bluestem and Indian Grass wave under a heavy sky: 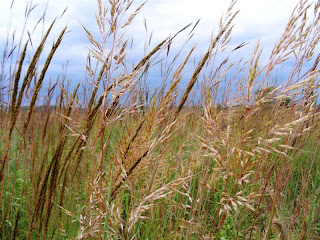 As an old friend once said, "coyote, they run this valley". And they do. Just last night we heard a large pack and their eerie voicing just behind out house. 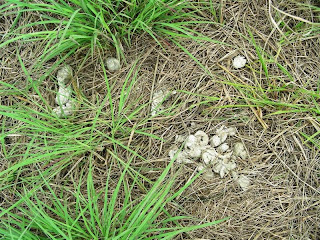 Looming thunderstorms sent us packing and yet we experienced so much beauty in such a short time we could not help but feel the luckiest people this side of the divide!
The nodding grass is Canada Wild Rye. The gone-to-seed wildflower is yellow coneflower: 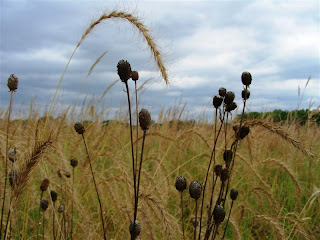