Remember that band - The Black-Eyed Peas? Yeah, me neither.

So here's the real mccoy - blacked-eyed peas from our garden: 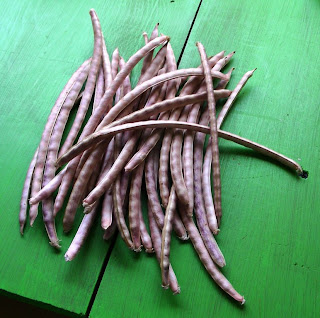 So what's the difference between a pea and a bean? Not much. All peas and beans are in the same family of plants known as Legumes. The incredible thing about legumes (other than their beautiful flowers) is that they "fix" nitrogen. Plants cannot use nitrogen directly from the atmosphere (as they can other atmospheric gases such as oxygen and hydrogen) so they must get it from the soil. Soils are generally low in available nitrogen. What to do? Long, long ago the first agrarian people figured out that rotating crops worked better than growing the same crop in the same spot year after year. The reason for this, and the reason its been done ever since, is that the rotations always included a legume (which helped the other plant in the rotation by providing them with nitrogen). In a symbiotic relationship as old as the first terrestrial plants, leguminous plants and a soil bacterium work together to benefit each other - the former gets nitrogen, the latter gets carbon for energy. Suffice it to say, without legumes we'd be up a creek without a paddle, foodwise (and barren-land-colonization-by-plants-wise).

Back to the black-eyed peas. They dry quickly on the plant and are very easy to shell: 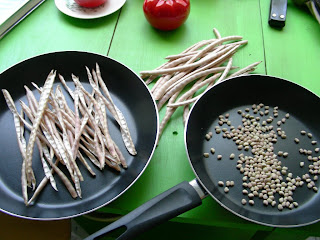 Check out these beauties: 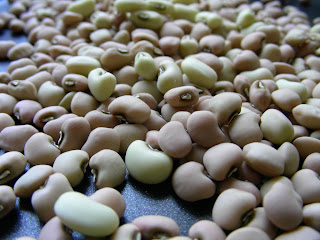 The pods are engineered with a twist that propels the seeds (peas) away from the mother plant; think Witch Hazel if you are East, think Screwbean Mesquite if you are west (the former is not a legume, the latter is - the seed propulsion mechanism is not specific to any one plant family). 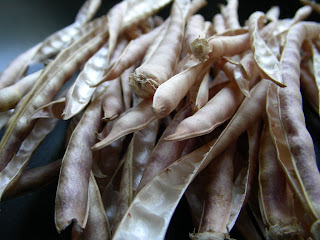 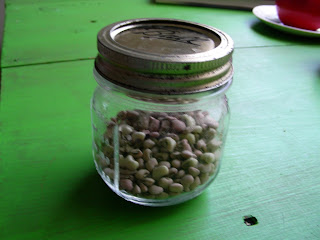 You can even tie the pods up for a start on your harvest season decorations: 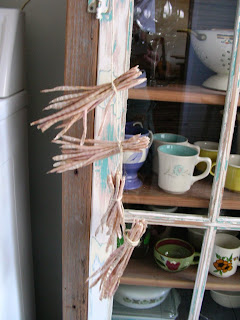 Black-eyed peas from the garden - way cooler than any formulated pop band, we think!
Posted by Jennifer at 6:30:00 PM

Email ThisBlogThis!Share to TwitterShare to FacebookShare to Pinterest
Labels: gardening