Yesterday we were hiking in an exceptional desert canyon in the Guadalupe Mountains and came across this cute little caterpillar hanging out on a bigtooth maple: 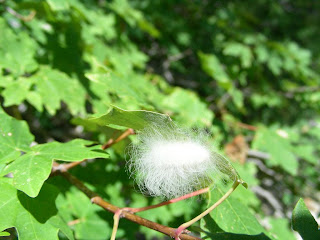 Jennifer's sleuthing revealed that is it a larval stage of the Black-waved Flannel Caterpillar. On its way to becoming a Yellow Flannel Moth, this fuzzy little critter appears cuddly but beware because, as David L. Wagner/Caterpillars of Eastern North America says, "...flannel moth larvae are among our most well-defended insects. Beneath the soft outer hairs are warts fortified with hollow, poison-filled stinging spines that are capable of delivering painful stings...one particularly large Amazonian species reaches more than 8 cm; stings from this behemoth, "el raton" (the rat) have purportedly resulted in human deaths."

Wow! Good thing we have a look-but-don't-touch policy. Still, this little one is very cute, we maintain (and deserves to be able to defend itself): 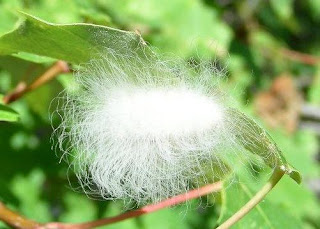