If you missed it, check out Barn Wood Book Shelf Part 1. Here's part 2:

Ever had a fast-forward day? That's what I had yesterday and it resulted in getting this project 90% completed in just a few hours. The first step was to attach some scrap 2x4's and 2x2's to the sides so I'd have something to fasten the back and top pieces to. The barn wood is very old and very weathered and so it splits very easily and does not lend itself to easy nailing. In the pic below you can see that I've got 2x4 "rails" that allow fastening of the top and bottom of the "box". What you cannot see is that I have vertical rails along the entire back of each side to allow fastening of the individual back slats. I could have used a large piece of plywood for the back but that would have been cheating a bit. 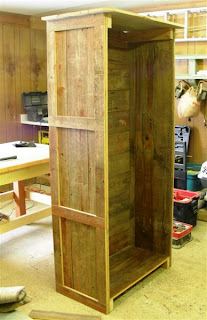 I then added another stationary shelf about 20 inches up from the bottom - this provides rigidity along the front of the frame (the sides would tend to bulge out if I had not does this). 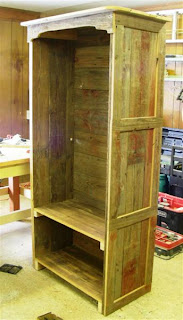 Next I needed to "cover up the ugly", as they say. The ugly, in this case, is the entire front edge. A face-board is often used for the task: 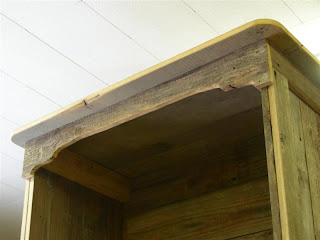 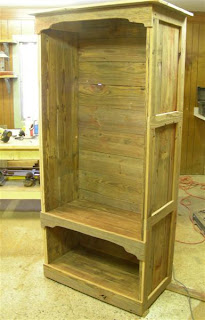 ...and some skinny verticals to tie it all together: 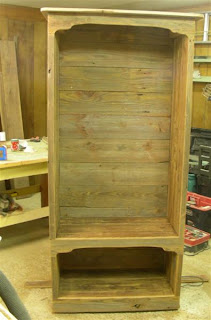 I then sanded the entire thing a bit with a palm orbital sander and some 40 grit. Yeah, 40 grit sounds pretty coarse but this wood is rustic and since I'm not "making watches" there's no point in getting too picky. If I was making this thing out of walnut or cherry I'd still be scratching my head and obsessing over measure-twice-cut-once. That's the beauty of using throw-away wood - there's not much to lose! We think it turned out pretty darn fine: 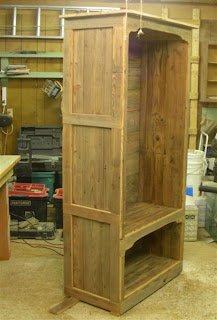