Links in a Food Chain

Here at Coffeetree Bottoms we feed the birds in a number of ways. One way is via the millions of seeds that form as our native wildflowers, grasses and forbs mature and then go dormant. It is incredible to watch a wide variety of songbirds forage throughout our "yard" and dine on that wild food source. We also feed the birds by scattering a bit of commercial seed "out back" so we can watch the birds up close through our windows. (Due to bird-window collisions awhile back, we decided to take down our feeders and simply scatter seed on our patio and on the ground - it works quite well).

As with almost every action, there are unintended consequences. In the case of our efforts to provide food for songbirds we also inadvertently provide potentially easier dining for raptors. It does not happen often as songbirds, even when distracted by feeding, are very wary - but yesterday we witnessed a songbird become its part in the food chain. A small hawk (sharp-shinned or coopers) made off with a songbird and landed in a nearby tree to dine.

We captured a couple of pictures. If you look closely, you will see the songbird clutched in the hawks talon: 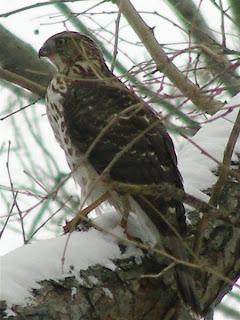 In the pic below it appears that, even after a successful hunt, the hawk must also be wary. Maybe it has had previous meals "stolen" by yet another hungry bird? 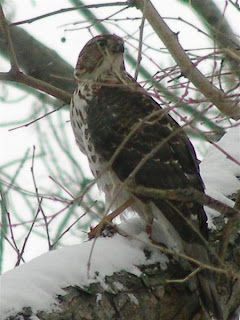 Here's a good quote for the occasion:

"Solitude is a human presumption. Every quiet step is thunder to a beetle underfoot, a tug of impalpable thread on the web pulling mate to mate and predator to prey, a beginning or an end. Every choice is a world made new for the chosen." - Barbara Kingsolver
Posted by Jennifer at 3:39:00 PM