A month or so ago Steve took two photos of a difficult to photograph little critter in our house and I just looked him up tonight. It looks like we housed a pseudoscorpion for a bit! 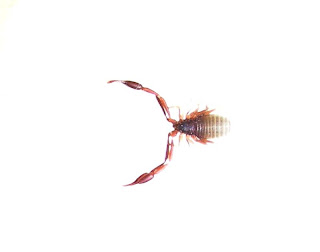 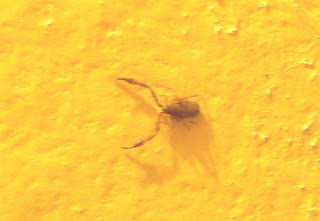 I found the pseudoscorpion general classification at bugguide.net - one of my favorite websites for helping with arthropod identifications. (Check out the Bug Guide link for some better photos.) I perused our National Audubon Society Field Guide to North American Insects & Spiders and did not find any pictures there, but did find some information regarding these arachnids. (Yes, they are in the spider family. If you look closely you will notice 8 legs, not 6.)

"Pseudoscorpions are small, flat arachnids, usually less than 1/4" long. Like true scorpions, they have enlarged, pincerlike pedipalps, but the short, oval abdomen does not have a tail or stinger. Some species have 2-4 simple eyes; others do not have eyes. Many species have poison glands in the pedipalps, which are used to subdue insect prey and small invertebrates. Pseudoscorpions also have silk glands, but unlike spiders, which have them at the tip of the abdomen, the duct openings are located on the jaws, or chelicerae. They use this silk to spin cocoons, in which they overwinter and molt. The male in one species produces another kind of silk from the rectum, spinning threads that direct the female to the stalked sperm packet. In most species, the female's brood pouch remains attached to the female's abdomen, and hatchlings stay in the pouch, feeding on a milklike liquid from the female's ovaries. In some species, the female abandons the pouch, and the embryos develop unattended. Often young require several years to mature to adults. Some species can live up to 4 years.

Pseudoscorpions are common in many different habitats - at the seashore, in caves, in houses between the pages of books, and in woods among mosses and under loose bark, leaves, and stones. They can manuever with great ease, moving forward, backward, and sideways. Frequently, they latch onto large insects, especially flies and beetles, and ride them to a new location. There are over 350 North American species, and about 2,500 species known worldwide."

It seems there are not many folks who can identify this arthropod to species so I am comfortable knowing him as a pseudoscorpion.