Cabin fever can certainly be a good thing if it inspires an invigorating winter walk. Yesterday we ventured into the cold on a quest for exercise and winter nature exploration. We went to a nearby cemetery where there had been recent sightings of some rare bird visitors from the north and what a time we had!

The cemetery is sited on a great rolling moraine and, by virtue of being a cemetery, spares an incredible stand of eastern hardwood forest from the axe. There are a few groves of Eastern Hemlock scattered about and the seeds that these conifers produce attract some interesting seed-eating birds that are normally seen far to the north. On this day we were specifically in search of white-winged crossbills as they had been reported to be feeding on seeds of the previously mentioned Eastern Hemlock. Crossbills are named for their bills (beaks) the top and bottom of which cross (the top and bottom curve right and left, respectively, of center). This bill type is particularly handy for extracting seeds from conifer cones. Wow!

As always, we do a bit a research before any such outing and found that, according to Sibley, white-winged crossbills are "Uncommon to very irregular (in E. N. America), sometimes common locally. Always in flocks. Feeds on conifer seeds, especially from hemlocks and spruces, and almost never seen away from those trees.".

Sibley's range map shows white-winged crossbills' year-round range to be much of Canada and Alaska. In winter they range down into the northern tier of U.S. state. They are rare in our area but they do visit as part of so-called "irruptions" whereby groups of birds move out of their typical range in response to population/food supply dynamics.

Armed with these facts we knew that this was one hearty bird - to be able to live year-round in the deep cold of the northlands. We also know that if we were to see them on our quest, we would likely see them in a flock and feeding on seeds in the hemlock groves. So off we went.

With binocular, bird guide, camera, and spotting scope we set off on foot, paying particular attention to any possible activity in the hemlock groves. At first we noted woodpeckers, juncos, nuthatches - birds typical of our area. Onward we went, admiring some very old and large oaks, when suddenly we heard an incoming and quite vocal flock of birds. Our attention was drawn to a grove of hemlock 75-100 feet in front of us. With our binoculars we could see that the hemlock branches were quickly filling with an unfamiliar bird: 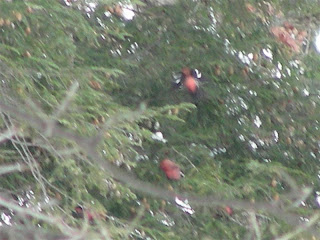 The males were pinkish-red, had black wings and white wing-bars: 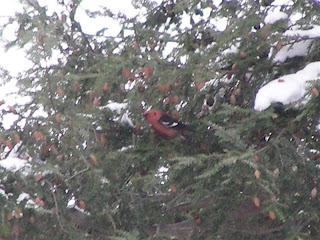 They would navigate the hemlock branches as if acrobats: 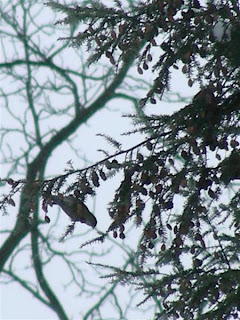 In search of, we presumed, the power-packed seeds inside the thousands of hemlock cones: 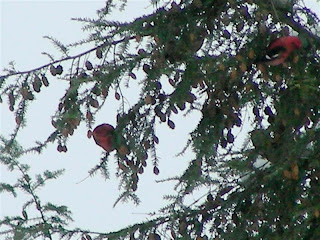 Often, they would feed in an inverted position: 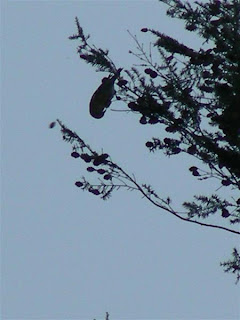 By now we knew we have achieved our quest for the day (and grandly!) - we had observed an incredible new-to-us bird: the White-Winged Crossbill !!!: 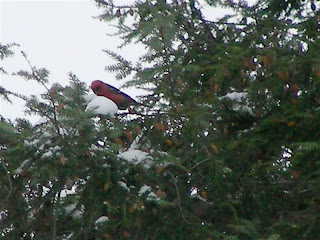 So next time you are hanging out under a hemlock tree, hear a raucous avian group from above, and are then showered with hemlock cone fragments, you might want to be thinking "hmm...crossbills?"

Oh lucky day for a couple of birding nature nuts!!
Posted by Jennifer at 7:12:00 PM