Harken back to A Hike at "The Edge" Part 1 and you will recall that we were exploring southern Ohio hill country on The Nature Conservancy's The Edge of Appalachia preserve and saw way too much cool stuff to be contained in one post. Here's the rest...
We looked long and hard for slug caterpillars because of all their spectacular shapes and colors and found this guy, one we've seen before...
the Saddleback Caterpillar which is so one of our favorites. If you find these guys don't touch the spines - they're wicked by all accounts. During pupation, the spines accumulate about the cocoon too! This cat turns into a brown and tan moth. 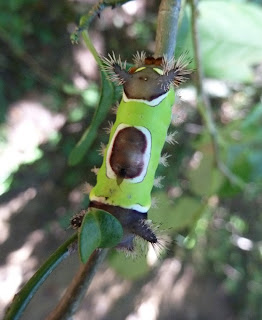 Randomly Jennifer noticed this spiny oak slug caterpillar on a cherry tree. WOW! This caterpillar sports many color variations while the adult moth is brown and tan with flashy green markings on the upper wing. 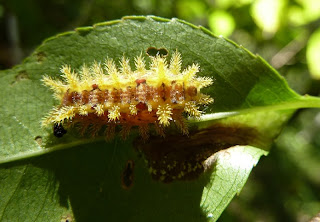 Yep - this is a slug caterpillar too. Crazy looking isn't it? Some folks surmise the monkey slug caterpillar mimics the cast skin of a tarantula as a defensive mechanism. The adult female, called the hag moth, resembles a bee while the male resembles a wasp. To quote David Wagner: "If ever there was a moth with reason for an identity crisis it is the Monkey Slug - should the above prove correct, then the same insect mimics three different organisms depending on its age and sex." 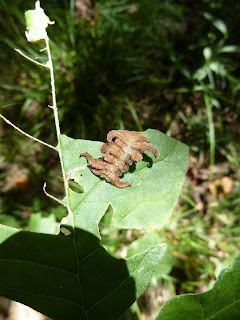 Steve spotted one of the spinx caterpillars soon to meet its demise by the many, many brachonid wasps inside their cocoons. American Butterflies latest issue contains a fascinating article on parasitism in the Lepidoptera. Not our choice way to go, for sure! 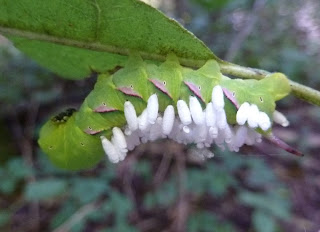 Steve also found this gorgeous fawn sphinx aka laurel sphinx. "Most individuals are recognizable by the blue horn that bears minute black spines." (Wagner, Caterpillars of Eastern North America) The adult moth is an attractive black and tan sphinx moth. 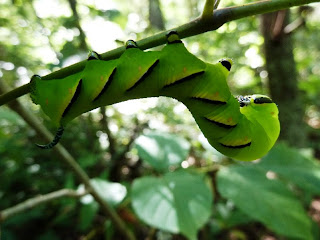 We both love pawpaw trees and their fruits (they're now Ohio bananas to us instead of the Indiana banana) and searched a patch of trees for the pawpaw sphinx caterpillar. We were tipped off by an accumulation of frass on the trail and sure enough, we found a number of these cool cats! The adult is a beautiful black and white moth. The connectedness of plants and insects and higher orders of animals is absolutely and incredibly amazing to us. I think that's one reason we've taken our exploring to this slower, closer observation. The realization of dependency and connection amongst all living and nonliving things is at the very least humbling. 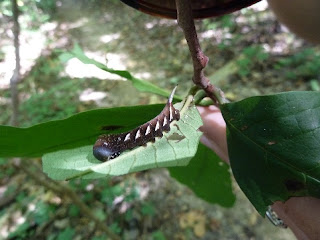 The banded tussock moth caterpillar is a common find on fall hikes and is most likely protected to an extent by its many hairs. The adult moth sports an attractive cream and white coloration. 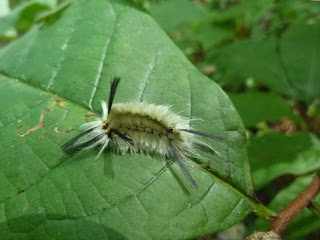 Oooo! We were excited to find this caterpillar - the unexpected cycnia feeding on milkweed, found previously by us in New Mexico at Rattlesnake Spring. The adult moth is all white with orange lining the tops of the wings. 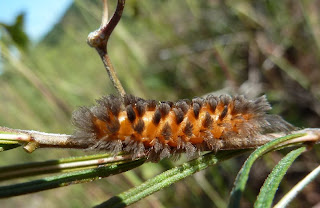 And finally a few butterfly caterpillars....
another spicebush swallowtail caterpillar... 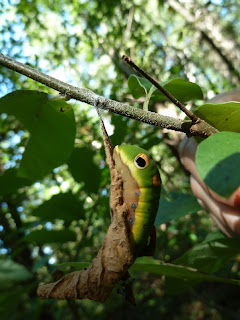 and tiger swallowtail caterpillar! We made this gal a bit nervous so she stuck out her osmeterium to ward us off. The scent from that organ is so peculiar. 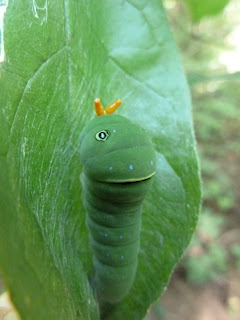