The Black-tailed Rattlesnake I saw last week was the first of a number of recent snake happenings around these parts. Here's that rattlesnake again: 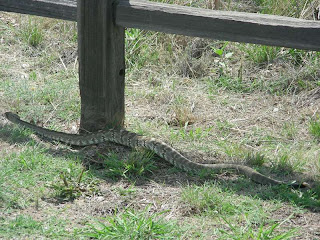 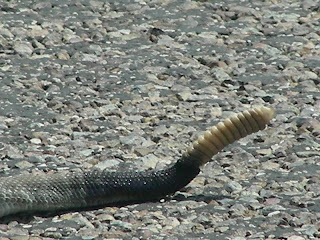 Then, just this morning, I came across this beauty not too far from where I almost stepped on the rattlesnake. This is a Gopher snake (thanks Renee): 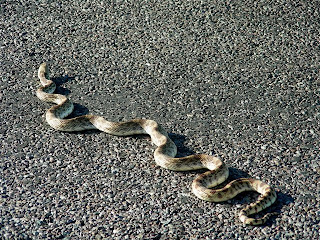 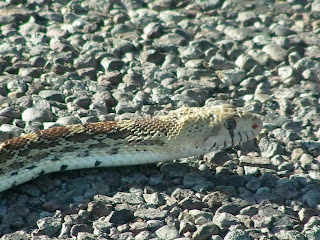 Then another employee at the park saw another species of rattlesnake (I don't recall which - I think there are 3 species in the park).

Then, I heard about this story out of Texas (Big Bend is about 5 hours from here):

The park received a satellite phone call at midnight on June 11th from
rangers on a river patrol reporting that a member of their party had been
bitten by a copperhead snake. The group was camped at the Asa Jones
Waterworks in the Lower Canyons section of the Rio Grande Wild & Scenic
River. The victim was a 35-year-old USGS research employee. A park medic
and an EMT-I stabilized him and asked for a helicopter evacuation at first
light. The park arranged for a Border Patrol OH6 helicopter, the only
available helicopter small enough to negotiate the canyon, to fly to the
campsite and transport the man back to the park. He was flown back to Big
Bend NP and transferred to a medical helicopter for further transport to a
hospital, where he is expected to fully recover. Floating the Lower
Canyons is generally a five- to six-day wilderness experience with little
or no access to the river due to the extensive shear canyons, many over
1,000 feet deep. Communication with the outside world is limited to very
spotty satellite telephone signals. At least four phone calls were
attempted before the message was transmitted and the rescue coordinated.

I'm told that Copperheads are rare this far west but do occur as proven by our unfortunate colleague above!

Not to worry, snakes are a natural and (inherently) valuable resident of our natural areas. I'm just gonna watch my step more closely....
Posted by Jennifer at 9:51:00 PM