The incredible extended warm sunny fall weather inspires daily hikes at our nearby nature preserves. On a recent hike at Arrowhead Marsh we noticed an unusual (to us) looking plant. Having gone to seed it had taken on a striking brownish-copper color and, on closer examination, 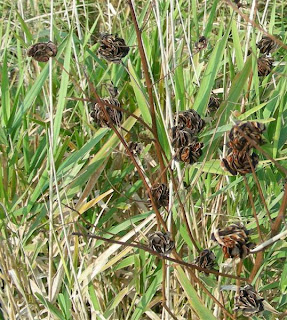 ...we marveled at the intricate and beautiful seed structure. 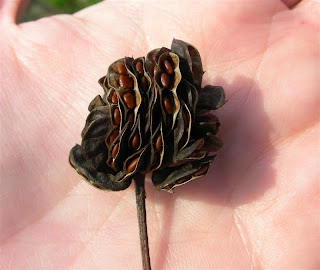 We knew it was a legume by its pea-like seed pods. We also knew that the seed mix for this restoration included two legumes: Canada Milkvetch and Prairie Mimosa. Later we checked with a friend and the web and confirmed that it was Prairie Mimosa. It was encouraging to see that it was producing seed and in such volume. Should be much more growing next year....... 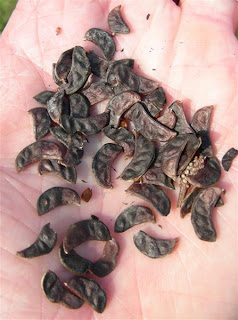 We also were treated to the aerial display of a hunting Northern Harrier. We like the other common name for this raptor - Marsh Hawk - because it is descriptive of the habitat it prefers to hunt and also because it's not associated with the Harrier Jet war machine. In the photo below you can see the Marsh Hawk hovering just before it dove to catch some prey. You can also see the white patch just above the tail - this patch is unique to the Marsh Hawk. 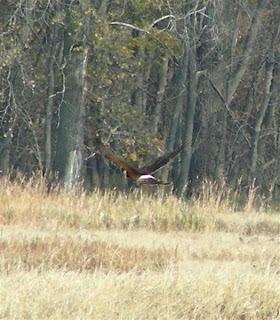 A nice backdrop to our hike was the occasional call of the tiny Western Chorus Frog (see pic below courtesy of Wikipedia), whose call sounds a lot like the noise you hear when rubbing your finger back and forth along the teeth of a comb. According to Peterson Field Guides: A Field Guide to Reptiles and Amphibians of Eastern and Central North America regarding Chorus Frogs: "Shallow bodies of water are required during the breeding season and for the development of tadpoles, but otherwise this frog survives in a wide variety of habitats, some of them surprisingly dry and greatly altered by human activities. Originally this was chiefly a frog of the prairies, but it has expanded its range to include agricultural lands and may even be heard in the environs of large cities and suburban areas, providing the pollution is not too severe." It was very exciting to hear the Chorus Frogs calling this late in the season - we suppose they were celebrating the beautiful day as well. 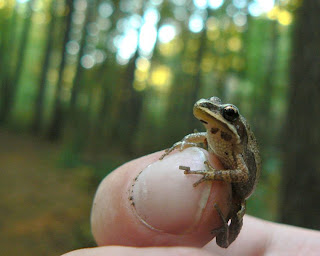 Such a short and simple hike and yet so many incredible nature sights and sounds!!!
Posted by Jennifer at 9:42:00 AM