While cleaning up this pile more, Steve discovered these: 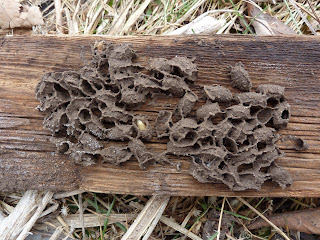 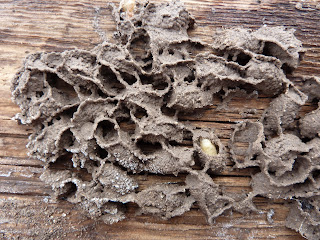 He called over to me real quick and we both marveled at these cool homes.  We saved this board from the burn pile of course (all boards are inspected and all critters are removed and placed elsewhere) and I sent the image into bugguide.net (one of my most favorite websites) for identification.  Charley Eiseman commented and I told Steve I felt a bit like a rockstar with such a smart, cool guy commenting on our picture!  Charley and Noah Charney wrote Tracks & Sign of Insects and Other Invertebrates and it's quickly become one of my favorite books.  Find a copy for yourself; it's well worth it!

These homes belong to a spider wasp in the tribe Auplopodini or genus Auplopus.  According to Eiseman and Charney: "Spider wasps (Pompilidae) in the genus Auplopus make thimble-shaped mud cells, about 10 to 15 mm long and 7 to 10 mm wide, often under stones or bark but sometimes in crevices on walls.  Some build their cells in cavities such as the abandoned cells of paper wasp and mud dauber nests.  They stock each cell with just one spider and usually amputate one or more of its legs."  So, the larvae eat the spiders while adult spider wasps feed on nectar and are important pollinators!  Cool stuff.